A Month in the Life of F1 Students 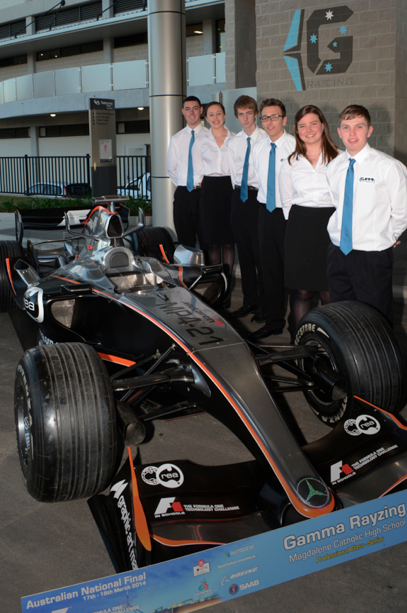 August has been Gamma’s busiest month yet and it doesn’t look like it’s slowing down anytime soon.

So Whats Been Happening

Car designs: It seems like it’s been a long time coming but  Gamma Raycing is proud to announce that they have made extensive progress on their final car design for the World Finals and so ‘The Ray’ as we are calling it will soon be a reality for the team. Watch this space for more information in the coming months!!

TABCorp: On the 2nd of August Gamma Raycing held a fundraising function at Menangle Park Paceway. This was a hugely successful night filled with auctions, raffles, games, silent auctions and of course racing paper cars down the 20 metre track. With a grand total of $22 000 raised it seems like the countless hours of hard work by the team and their supporters finally paid off on a night full of fun and support for the team.

C91.3: The very next day – Thursday the 7th – Matt and Hannah were on air with Josh and Lyndal on C91.3’s Fresh Breakfast. The team loved seeing what happens behind the scenes at a radio station and talking to Lyndal and Josh about Gamma and our ‘Race to Abu Dhabi’. At the end of the interview, Gamma was presented with a cheque for $1 000 as a part of the C91.3 and Channel 9’s ‘Make a Difference’ Competition.

National Skills Week Launch: Hannah, Elyse and Matt presented in front of 400 teachers and careers advisors on Monday 25th at the SkillsOne launch of National Skills week at NIDA and. We were honoured to be asked to speak about the opportunity F1 In Schools has given us and the difference it is making in students lives all over the world.

V8 Supercars: On Friday 22nd, Gamma were able to travel to Eastern Creek to meet some of the V8 Supercar teams participating in the Sydney 400. The team was even invited into the Mercedes AMG Erebus pits before the qualifying and especially loved talking to the design engineers from Mercedes AMG. Elyse found a new hero in Betty Saunders – Kilmenko, the owner of Erebus Motorsport V8.

Narellan Rotary: On Tuesday 26th, Gamma were the guest speakers at the Narellan Rotary and were able to connect with influential members of the local community to share what we’ve learnt and the impact that it has had on us as students. We would like to thank the members of the Narellan Rotary for their generous contribution of $1 000 to help the team get to Abu Dhabi in November. And also to Mr. Tony Perich, a member of Rotary for his presonal donation of $1,000.            New Team Uniforms: The team were very excited to receive their new Gamma Raycing casual team uniforms which we will be able to unveil in the coming weeks.

Competition Regulations: With the release of the official new World Final regulations, Gamma are able to really put their heads down and start getting ready for Abu Dhabi!

Promotional Items and Fundraising: Gamma have ordered some of their new marketing products and they are on their way!! To help pay for these we have ordered Cadbury chocolate boxes which are selling like…. well, chocolate! But never fear, more boxes have been ordered and will be arriving soon.

At all events were incredible opportunities to be able to showcase not only Gamma and our journey to the World Finals but also about how the F1 In Schools Challenge is changing the lives of students all over the world.

Gamma Raycing are truly on the home stretch of their race to Abu Dhabi.

Batman comes to the rescue

At the World Final, the average age of the team will be 16.5 years and the total age will equal 99 years. This gives us 99 years of experience at beating everything the world can throw at us.